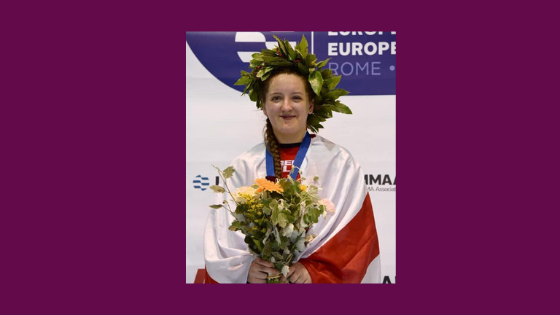 Mixed martial arts and CBD oil - not a combination you’d think of putting together. But over recent years, a budding relationship has struck up between a host of MMA fighters and CBD, the ultra versatile compound found in hemp.

Spirit of Hemp is proud to announce their sponsorship of 20-year-old Manchester fighter, Izzy Mithcell, just in time for her to win this year’s MMA European Championships in Rome.

Nutrition student Izzy took up mixed martial art - a combat sport combining wrestling, grappling, kickboxing and jujitsu - at the age of 16. According to Izzy, “it just clicked”, and before long she was not only training children in MMA, but had started competing herself as an amateur MMA fighter.

Being a MMA athlete requires a punishing training regime, and each week Izzy clocks up 18 hours in the gym to get ready for competitions. How the body recovers between training sessions is key to overall performance and is something Izzy had previously struggled with. Before her first amateur fight back in April 2019, Izzy found that by the time the fight came round, her energy levels were so low she had nothing more to give (the fight was a draw).

But when it came to the European championships this year in Rome (only her second ever fight), Izzy had a secret weapon up her sleeve.

Nineteen days before the competition, Izzy received a gift pack from Spirit of Hemp, containing CBD oil oral drops, Life Force Serum, and hemp flower tea. Izzy then began using the serum in her physio treatments for an injured shoulder, and the CBD oil at night to sleep peacefully after the adrenaline-packed training sessions.

Izzy had heard about CBD from several other MMA athletes, but wasn’t sure which product or company to choose. After a conversation with Spirit of Hemp Founder, Louise Callinan, Izzy felt confident she’d found the right company to sponsor her for the European Championships, and Spirit of Hemp were delighted to support such a talented and determined female athlete.

This time on competition day, despite the same punishing training regime, Izzy still had enough petrol in the tank. Something that before CBD had eluded her.

Izzy explains: “Overall I do think CBD helps as I feel more ready to go for each session. I feel like my body is rested, it’s recuperated from the session before and ready to go again.”

For Izzy, CBD is part of an overall self care regime that is now part of her competition preparation. “Mentally it helps,” says Izzy, “as you know you’re not just putting your body through the stress, you’re making time for yourself as well.”

And when it came to competition day, this holistic approach to training yielded amazing results. As of the 22nd June 2019, Izzy is officially the European Junior Amateur Women’s Mixed Martial Arts champion.

Izzy’s campaign for glory hopefully won’t end there. In November this year, she will be heading to the MMA World Championships in Bahrain, where she will continue to be sponsored by Spirit of Hemp.

Spirit of Hemp founder Louise Callinan says:  “We were over the moon when the opportunity came up to sponsor Izzy and thrilled to hear that she’s getting such good results from our whole plant CBD range. We know at 20 years of age her career is just beginning, and we hope to be with her every step of the way.”