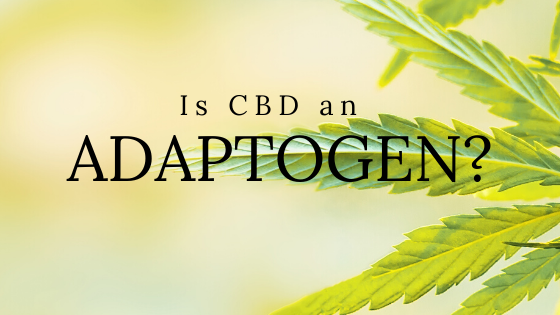 Stress is everywhere at the moment. As a species we don’t do well with uncertainty, but between Brexit, an upcoming general election, and an environmental crisis careering towards us, quite a few of us are having sleepless nights. Throw in the normal stressors such as juggling careers with raising a family and the inevitable curve balls life likes to throw our way, and it’s no wonder we’ve never felt more on the edge.

Everyone has their own coping strategies: a glass of wine (or two) at the end of the evening, zoning out watching Netflix or ploughing through as if nothing were happening. However, left unchecked, stress will make us ill as it is linked to everything from depression/anxiety, heart attacks, and even cancer.

Taking plant extracts known as adaptogens has been gaining traction recently as a way to support the body through stressful times. Top of the list are ashwagandha, maca root, rhodiola, siberian ginseng and holy basil, with studies suggesting they can help return the body to a state of balance, reducing symptoms like anxiety, brain fog, fatigue, and low immunity.

Why The Big Fuss About Adaptogens?

The term ‘adaptogen’ came into use in the 1970s when Russian scientists discovered that natural plants such as siberian ginseng allowed soldiers to resist the extreme stress they encountered, aiding physical performance and clear thinking. It was as if these plants had some protective effect on the human body.

Why is homoeostasis important? Our natural state is to be in balance. However, thanks to the continual bombardment by external stressors, this is a dynamic process with our body continually having to adapt to new information. When this state of adaptation fails to return to homeostasis, cells can instead move into the state of apoptosis or cell death. So it’s key to do everything we possibly can to help our bodies keep in balance.

Adaptogens therefore promise to help us weather the storm of 21st living, without crashing and burning into physical or mental illness.

The Endocannabinoid System and Homeostasis

Adaptogens are typically described as regulating homeostasis of the neuro-endocrine-immune complex - the balance between our central nervous system, hormones, and immune system. However, not mentioned is a relationship between adaptogens and the endocannabinoid system (ECS).

The ECS - the vast network of cell receptors and natural cannabis-like chemicals bringing balance across all biological function - was discovered a good twenty years after the term adaptogens came into being.

The ECS is thought to act rather like a dimmer switch, kicking in when ever there is too much or too little cellular activity and its work is all encompassing. Our mood, appetite, reproduction, sexual function, immune system, cell proliferation, in short, pretty much all that happens in our bodies is regulated by the ECS.

This includes the HPA axis, one of the key targets of adaptogens. Scientists have found that CB1 endocannabinoid receptors are essential for the regulation of the HPA axis, stating “the effects of endocannabinoids on the HPA axis are consistent with their neuromodulatory action on brain neurotransmitter systems.” Therefore, it’s fair to say that the ECS has an important role in protecting us against stress and should also be a target for adaptogens.

CBD, the Endocannabinoid System and Homeostasis

We recently wrote how CBD, the non-intoxicating compound in cannabis and hemp,

can help promote balance in our bodies and minds. Not only does CBD activate receptors related to mental wellbeing, pain and inflammation, but it also supports endocannabinoid function. This gives us a better chance of coping with stress and achieving the holy grail of homeostasis.

Is CBD an Adaptogen?

While CBD certainly seems to share similar traits with other adaptogens, right now, you’d be hard pressed to find any peer reviewed scientific papers stating outright that CBD is an adaptogen.

It’s certainly true that like adaptogens, CBD is reported to improve symptoms of a host of health conditions, but the fact that CBD (cannabidiol) is a molecule and not a plant extract goes against it being classed alongside the likes of ashwagandha, maca root etc. So, perhaps it would be better to talk in terms of whole plant CBD oil, or even the hemp plant itself as having adaptogenic qualities.

At Spirit of Hemp we advocate a balanced approach to combating stress. Of course we’re big fans of taking CBD oil as a way to cope with feelings of overwhelm, but we also encourage our customers to consider making lifestyle changes to minimise some of the stressors in our lives. That said, if you have any questions about our organic CBD oil range, please don’t hesitate to get in touch with our customer service team.